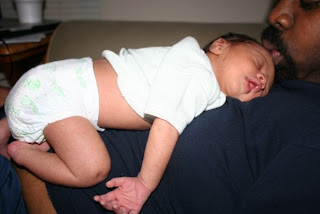 I don’t often tell Toyin how much I appreciate his good parenting. But today seems like an appropriate time to say that he’s a great dad. He loves Annika more than anything or anyone else in the world. He’s never said that to me, but I can tell that it’s true by the way he cares for her and how he responds to her.

Single men, particularly, Black men, are stereotyped in this country as being lame partners, deadbeat dads, generally bad fathers. But I want to take this opportunity to say that Toyin does not, and has never fit that negative image. He has gone far above what most people in this country expect of typical single dads who are not living with or married to their child’s mother.

Annika was not planned. Toyin gave up a promising job in a new city filled with new friends to come live in Austin and be with us. He supported us for the first year and a half so that I could stay at home with Annika, thus securing a solid start to her life.

He sees her every day, even when it’s not his night to take her.

He is kind, loving and attentive.

Looks like I have a new holiday to celebrate. June 12 is the anniversary of a Supreme Court decision that struck down the country’s final Jim Crow laws, allowing inter-racial couples to marry and cohabitate. This decision was only a few years before I was born.

It’s strange to think that only a brief period of time has elapsed where it was illegal for Blacks and Whites to get married and just one generation before, my daughter would have been the product of a union that was illegal in several states until 1967.

I am glad that the laws have changed. And I think that many people have changed their attitudes about inter-racial coupling. But I think we still have a long way to go.