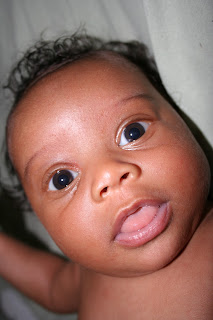 We just ended a day of puking and shitting.

No, I did not get drunk last night. Annika has a stomach bug.

There’s something about going through a day like this that gives me the feeling of pride in my dedication as a mother. Like, I earned a Girl Scout badge or something. I mean, I felt all proud of myself the other day for surviving Ikea with Annika (not in a stroller, mind you). But that was nothing compared to getting puked on, multiple times. Then doing an astronomical amount of laundry, all the while keeping close by her with the puke bowl and making sure she stays hydrated.

Let me just break it down for those of you with small babies or no kids yet. There is nothing so shocking as having your kid walk up to you and say, “Mommy, my stomach tickles. I need you to pick me up.” So you pick up the child, while standing in front of the microwave, thinking she’s just tired or something. And then, for the first time in her life, copious, and I mean, copious, amounts of fluids come out of this child’s mouth, and drip down your front, in between your breasts, and surround you in a puddle on the floor.

Then she smiles wearily and says in her squeaky little voice, “I feel happy now!”

I should mention here that Annika has been experimenting with the various emotions and she has not always been using happy in the proper context recently. But hey, I’m super glad that she’s trying that one out because for weeks she was angry and frustrated a lot. It was starting to worry me, then she started in on happy. Note to self: An almost 3-year-old’s experience with emotions is not completely unlike tripping on acid or being in love for the first time.

So, yeah. She was not exactly happy last night. Although, she took it like a trooper. She leaned into the toilet bowl like she’s been drinking southern comfort all her life and hugged it like a rock star. Then she smashed her guitar against the door and showed me the devil sign. Then she puked again, in the bed, on the floor, in the bathtub. You name it. My floors had already seen better days, but now they’re just like, “Ah, fuck it. We’re disgusting.”

I was actually quite surprised that she continued to vomit for so long.

Annika never ever gets sick like this. She’s had some colds. Never ran a fever for more than a few hours. Had some snotty noses. But otherwise, she’s been the picture of health since day one.

I was up all night, washing clothes and holding her head over the bowl. She finally passed out around 3 a.m. I stayed up, mostly because I couldn’t sleep, all pumped up on Mommy endorphins. Then around 6:30 a.m. I passed out only for her to pop up at 7 a.m. and say, “It’s morning time Mama! Time to get up.”

Anyhoo, that was my day today. My first puke fest ever. It was magically chunky.