My final submission of love comes from one of my favorite bloggers. Aside from the fact that I was all excited that Alex, who blogs at Late Enough, actually submitted something to my lowly little blogger self, I was inspired by her post and I thought about rushing out to Target to buy a mailbox after I saw one of her commenters say that you could get them there for a dollar.

But I’m cheap. (Okay, not really that cheap. But I’m also lazy.) And plus, since we live in an apartment and have a tiny little square for a mailbox, I’m not entirely sure that Annika would understand what it was and would probably just try to use it for a baby doll crib, or a pizza box. So I thought about it. And then I found this chalkboard that she never uses and I hung it up in our kitchen and began writing notes on it. She loves it. 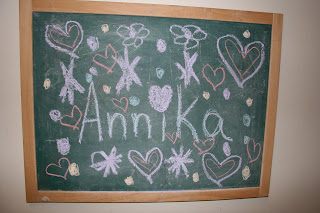 I hope that this post inspires you as much as it did me. And even if it doesn’t, I feel pretty certain that you would enjoy reading more of Late Enough. So check it out. She’s entertaining and educated. You can’t beat that with a stick.

Love in a Mailbox

My children are obsessed with mailboxes. Straight up metal boxes with flags. They think that the holy grail might be hidden in one.

Everyday after school, we have to walk down the sidewalk to the school’s mailbox and open and close it. EVERY DAY FOR THE LAST FIVE MONTHS.

We’ve discussed what the flag means. If school has mail. If the mailman is coming or going.

At home, my poor kids only have a the door slot. The city-living mailbox.

The deprivation in my home is endless.

This weekend we were grocery shopping (in VEGAS –actually I’m just trying to spice up my weekend) and a Valentine’s Day mailbox was on sale for $2.25. OUR VERY OWN MAILBOX. WITH A FLAG.

Finally all their dreams come true.

Then I remembered a post by Mom Soap on how she wanted more ideas about how to daily express her love to her daughter, and I thought: I can leave my kids LOVE NOTES in the mailbox EVERYDAY. And I began to applaud myself.

I should probably point out that my children cannot really read. However, I CAN read so I got busy write my first note.

Except my son beat me to it.

Now, I’m a sucker for a lovely-dovey thing from my kids. The first time my son brought home artwork for me, I almost made it into a T-shirt. We even framed this one.

(We originally had the The Garden of Earthly Delights in it. And for those of you unfamiliar with this work, there’s a panel for heaven, earth and hell. So it’s not exactly Sesame Street. Maybe a touch of Sponge Bob. There was definitely a lack of pants.)

So I bound over to the mailbox and received my first letter!

Um, am I trying out for my mom position?

And then my husband asks: Who ripped up my paperwork for the office?

Not to be thrown off the love note path, I write E one of my own love note.

I’ve received no lovey-dovey since. Probably because he has no idea who Alex is. Also, he can only write his name, and Scott has hidden all the rest of the be-a-mama paperwork.

UPDATE: I have still received no lovey-doveys.  I have, however, received three dinosaurs.