My fourth submission of love is some pretty great advice for those days when you just want to yell and scream your kids into submission. Hannah’s advice for handling sibling fights will not only (possibly) calm your kids down, but it gives you an opportunity to give them a nice compliment at the same time as disrupting a fight. Two birds with one stone. I like it.

Hannah blogs over A Quiet Spot. She mothers and home-educates her three children full-time. They live in Austin and love it.

So I know that at YOUR house, complete harmony among siblings is the
order of the day. But chez moi? In the last few days weeks months, my girls
have remained frozen in a sort of suspended animation, constantly hovering
between friendly play and all out bickerments.

They know EXACTLY how to push each other’s buttons. The older one provokes, exhibiting mastery of the passive aggressor. The younger one,certain as the sun rising tomorrow, reacts, with considerable volume. It’s like a beautifully choreographed ballet, except that the audience (me) wants to storm out of the theater in a riotous one-woman mob. 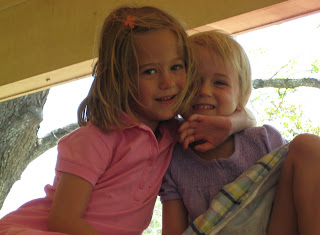 You know what, though? I’ve been down this road before. When Ian and Eliza were at these ages and stages (see below), they danced the very same pas de deux. He’d provoke; she’d react. I could never understand why he found it so satisfying to elicit screeches and tears from his sister, and more than once, I wanted to bellow in my exasperation, “YOU are SO MEAN! You are a MEAN CHILD!” 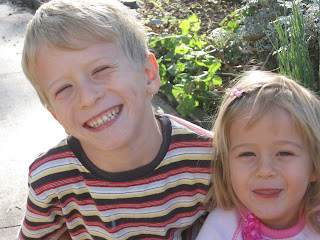 Which I want to do sometimes now, since the former “victim” has become the new “tormentor.”

Here’s what I learned: Right when those angry words are buzzing on the tip of my tongue is the perfect moment to speak the unseen truth. To walk by faith and not by sight. To look past the behavior and see the heart.

“You are NOT a mean person,” I would say to my son. “You have the capacity to be very kind. Teasing your sister like that is not worthy of who you are.”

Speaking those words helped me believe their truth, and hopefully taught him that my love for him meant my seeing the best in him, even when he kept it hidden.

And now? Fights between the older two are pretty rare, I realized the other day. Not extinct, just not a part of our daily reality as they once were. They tend to hang together as a team. Which gives me hope for my darling daughters, next time I’m tempted to post them on Craig’s List.

(Do I even need to tell you I’m kidding?)