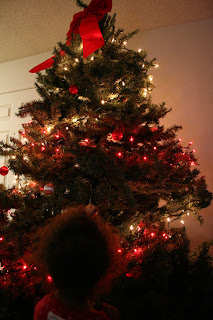 Over the past couple of weeks I’ve been thinking on and off about taking Annika to see a Santa Claus to get her picture taken. I have my doubts as to whether she will actually sit in the lap of a stranger, but I decided not to take that into account. Either way, I thought she might get a kick out of seeing him.

But I just can’t bring myself to do it. And then it hit me. Santa is creepy. Well, to me, anyway.

The idea of Santa isn’t creepy. The mythological, wondrous, magical Santa Claus that I dreamed of as a child is great. But the idea of bringing Annika to sit on the lap of a stranger in a mall just creeps me out.

This is not a judgment on those who bring their kids to see Santa Claus. I still might even do it. This is purely my own neurotic weirdness about touching people, and in particular, strangers.

I’m not a very touchy person. I have to be in just the right frame of mind to initiate a hug, even with someone I’m close to.

Plus, it’s not a fond childhood memory of mine, so I have no sentimental attachment to the idea. As a kid, we never went to see Santa Claus.

The closest I ever came to seeing Santa in real life was when we got a visit from our local fire department chief dressed as Santa on the first Christmas Eve after my little brother was born.

My little brother was an unplanned home birth and the first responders on the scene were firemen. Technically, the fire chief delivered my brother. I suppose he felt a special sort of bond with my him. So that year he and his crew showed up late on Christmas Eve in their red fire engine to give my little brother a teddy bear.

I was already in bed and when I heard the firemen come in the house. I remember it like a scene in a cheesy Christmas movie. I snuck out of bed to watch the scene from the upstairs. I knelt down in front of the railing that crossed the upper part of our split level house, watching in excited disbelief as Santa Claus bounced my baby brother on his knee.

That was the most magical memory I have of seeing Santa in real life. And truthfully, that was as close as I ever wanted to get to him.

So now, as a parent, I’m not sure how I feel about taking my daughter to sit in the lap of a man whom we don’t know. I kind of like the idea that she keeps Santa at a distance, making up memories of him in her head, the way I did.

Do you take your children to go see Santa? Does it ever feel creepy? I don’t have much more time if I’m going to do it this year.