I have a question for y’all. Would you, or have you ever re-gifted a used toy to your child for Christmas?

I happened to get this adorable little Melissa and Doug dollhouse for free from another mama whose girls had outgrown it. It is in great shape, except that it needs to be painted over because they decorated it.

I am planning to paint it and give it to Annika under the tree. It will be one of her “bigger” gifts. She’s already gotten a bike this year (used from Craigslist) and other than maybe a bigger dollhouse or something similar, there aren’t any other big gifts that would be age appropriate. Plus, I’m on a budget.

So, as I planned this, I got to wondering if other parents do this kind of thing, especially for younger kids. Maybe when they’re older, it wouldn’t be copacetic. But for now, my rationale is that she won’t really understand that it has been played with before, nor would she even care.

She is still at a point where she barely understands Christmas at all. Last year, she was clueless about what was happening. After each gift, she just wanted to play with it and we had to prod her to open the next one. Even once they were all opened, she seemed a bit confused as to why she was getting all these toys wrapped in paper.

This year she understands that Christmas is coming and she will get presents. She now knows who Santa is and has been pointing him out to me everywhere she sees one. But she doesn’t understand the materialistic aspect of it. She has no expectations about the holiday. She is still the age where Christmas is simply magical.

So, in thinking about the values I am teaching her as she grows up, I also want to impart to her the value of reusing perfectly good things. I think we all understand the value of recycling. I know most parents wouldn’t think twice about giving their child a hand-me-down toy. But for Christmas?

There are two ways to look at this.

One, a negative message sent, that maybe she would think I don’t love her enough to buy her a a new toy that someone else hasn’t put their hands and decorations all over. Christmas is a special time and I want Annika to feel like I put love and care into her gifts. Otherwise the whole season loses out on its meaning of family and togetherness. If you don’t impart those joyful feelings during gift giving, then the whole thing just becomes materialistic.

But the other way to look at it is that I saved money on this gift, so I was able to buy her some other things she would like. Also, like I said before, I think it’s important to send the message that there is nothing wrong with reusing. In fact, it is good for the environment.

I was raised with these values. Maybe a little too much. My parents don’t throw anything away. They are the masters of saving items that may or may not be useful in the future.

But even so, I never received a used gift at Christmas.

I think Annika’s generation will look at reusing differently than my generation did. And maybe it will be because we sold that message throughout the year, even at Christmas.

What do you think? Would you? Have you? Given a used or re-gifted gift to your child at Christmas? 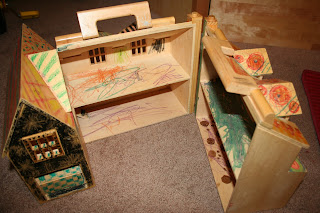