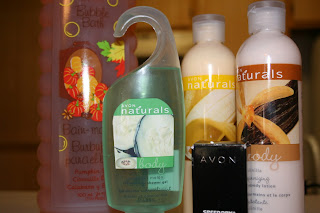 Every single choice we make affects our lives for the long-term. This is a lesson that has been hard for me to grasp. I’m a procrastinator. I’ve spent much of my life thinking of the someday. Well, someday never happens unless you make a choice. Someday isn’t going to just happen.

I had a recent stint as an Avon lady. Stint is probably over-selling it a tad. I signed up, avoided it for a month and a half. Went to two training session where the leader of the group pronounced jewelry as jewrree. Then I bought several bottles of lotion, shower gel, nail polish, and bubble bath, thinking I’d just sell it out and about.

Then I decided to quit.

Not because there’s anything wrong with selling Avon. Not at all. I signed up because a close friend of mine had signed up to do it and for a brief moment, it seemed like a good idea. I figured it’d be easy. I mean, who can’t sell lotion and shit? Right?

For those of you who know me in real life, or if you’ve been reading my blog for very long, you’re probably having quite a chuckle right now. That’s okay. Go ahead. When I announced it to a group of my friends, they laughed. I laughed along with them. I mean, what the fuck? Me, selling fucking Avon? It’s wrong on so many levels. Not that I can’t sell. I can. But I can’t do it unless I believe in what I’m selling. And ladies, I just can’t sell wrinkle filler. Can’t do it. Plus, this shit’s priced higher than I would personally pay for that kind of stuff. I have no idea what the hell I’m going to do with these $8 bottles of lotion. I guess everyone knows what they’re getting for Christmas.

The reason I’m telling y’all about this is because it totally fits with last Sunday’s talk at my Buddhist program at Miira Suniita. The group leader spoke about the beauty of preciousness of ordinary life.

She talked about how our intentions are all we need to ensure that our lives reflect our goals.

The fact is that selling Avon doesn’t reflect any part of my life goals and it is a poor intention for me.

In order to live your life every day, the way you want, you set your intentions. She suggested setting weekly intentions. And even intentions for your sleep, right before you go to bed.

So that’s what I did this week. I made a list of all concrete things I’d need to do this week to set me down a path of goals that have been hovering around my brain for months, years, hell, some of them, all my life. I set intentions in my head for having good sleep and productive dreams.

Last Sunday, our group leader talked about how powerful our brains are, we imagine our lives. She said how very important it is to maintain a positive mind, because a positive mind will lead us down the path toward our intentions. A negative mind is something to be avoided.

I couldn’t agree more. I’ve spent way too many years allowing the negative thoughts to control my life. Thoughts like, “Oh, it sure would be nice to have that, but I can’t afford it.” Or, “Well, I’d love to do that, but it would be too hard.” Then I forget it. It’s done. See how a negative mind shuts down dreams?

Not trying is worse than trying and failing. Because at least if you try and fail, you’ve learned something.

As she spoke I thought about how easy it is to shut down my own dreams and wishes with one fell swoop. I wondered if I allowed myself to have that dream. To say, “It sure would be nice to have that thing that I want. I can’t afford it right now. But someday, maybe I will.” Or even better, “It sure would be nice to do that thing, It’s going to be hard, but I wonder what I would need to do to make it happen.”

Because really, our lives are pretty damn amazing. We have everything we need. No matter where we live or how much money we have in the bank. We live in a free country, where we have so much power. We have control of our government (in theory). We have power as consumers. We have free speech. We have freedom of religion. We have an almost absurd amount of choices in what we eat, drink, wear, and do. We can change our lives without any interference from anyone.

I think that in itself can be a problem. When you have an infinity of choices, it can be paralyzing. So much so that we often give ourselves excuses of why we can’t do it, simply so we won’t have to make any decisions.

Decision making is hard. It paralyzes me over and over. All the what ifs get in the way of making clear choices.

But what ifs aren’t concrete. They aren’t bold statements. They are possibilities. And possibilities aren’t that great unless you make a choice and move forward into a clear path.

But what I was really doing was making habits for myself. Steering myself away from rejection. Playing it safe.

When I signed up to sell Avon, it was just another way of avoiding what I really want. Because it’s scary, to define yourself with what you really want in life. Because if you fail, then you’ve lost your dream. Failure to sell Avon isn’t taking a chance. Because I can blame the product, or the lack of availability of customers. Or a poor economy. It was a safe choice straight into failure.

What I really want in life is to make it as a writer. To get paid to write. And I don’t want to just settle for writing mediocre mass-produced crap. I want to write things that really make a difference to people when they read it. I want to step boldly into new territory, and make possibilities spring to life. I want to give gifts to world with my writing.

And hell, if I lose my dream. Maybe I’ll find another one. Life is full of choices. Because, as cliche as it is, if you don’t try. You’ll never know what could have happened.

In the mean time, while I come up with world changing topics to write about, I’m offloading some overpriced lotion and shower gel. Let me know if you want some. (See? Just can’t do it.)