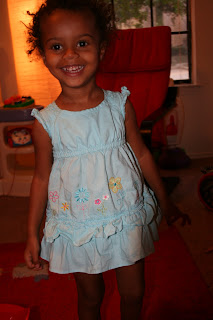 I had a huge ah ha moment late last week after my last post on race, where I talked about how I have avoided calling Annika “Black.”

For all my thinking on the topic of race, my education, my professional experience, my friendships, and my discussions with Toyin, I thought I had figured this one out. But I realized that I was doing exactly what the research says is a big no no. My avoidance of calling Annika a Black girl is exactly not what I should not be doing.

the research shows that White parents who avoid discussing race, thinking that will make their children colorblind to skin tones, actually achieve the opposite effect. Children can clearly see that other people have different skin colors. Just like anything they are curious about, they want to talk about it with their parents. But the avoidance of discussion sends the message that it’s not okay, which sends the message that Black people are not okay. The authors of NurtureShock

found that parental avoidance of skin color discussions sent the message to their children that they did not like Black people.

I thought that since I had discussed our skin colors with her that was enough. I thought that my willingness to talk about race with her would open us to conversations throughout her life. But children pick up on subtleties that we don’t even think about. There is power in what is not said.

The thought that I might have sent any negative message to Annika about her skin color worries me. I think she’s still too young to have picked up anything that complex. But then again, I don’t know. She amazes me constantly with her new remarks and thoughts. Just last week she has started to say, “Mama, I got an idea.”

Holy crap! You’ve got ideas??? When did that happen?

So, even though I knew that having a Black daughter would open me up to various viewpoints throughout her childhood, I thought I was on the right track. I had heard over and over, my Black friends saying that it was tiring to always be labeled, “The Black guy/woman.” But those viewpoints were coming from adults who understand the complexity of human language and thought behind it. They’ve already figured out their racial identity.

After I wrote that post, I thought, “hmmm, this sounds like maybe I think that there’s something wrong with being Black.” That’s not the case at all. (Seems like that should be obvious, but what the heck.) In fact, since having Annika, I think I have become even more colorblind.

When I look at Annika, I really don’t see skin color. I mean, I see it. I see her. I see that she looks the way she looks. What I mean by colorblind is that I don’t assign any qualities to her based on her skin color. I don’t jump to her skin color as a defining quality because I see so much about her to describe to the world. So, the experience in the sandwich shop was a bit of a jolt to me to view Annika and myself through that colored lens, once again. I don’t know why it keeps being so shocking to me that people see us that way. When I told Toyin about it, I noted that never would have happened to him, the confusion about what racial qualities his child would have. It’s not like I expect everyone to notice our similarities, or even that I expect people to assume anything other than what they do. It’s just surreal, to view us through a stranger’s eyes, and notice the differences that I don’t see.

I see Bi-racial families and children all the time now. I notice them the way I noticed pregnant women when I was pregnant. I always assume that they are blood related, not adopted, even though I know logically that some of them probably are. But then again, it’s logical to assume that some homogeneous-looking families have adopted kids, yet, I don’t think to wonder about that.

And as I continue to notice other families who have made the choice to love others with different skin tones than themselves and to procreate, it warms my heart to know that by the time Annika is an adult, there will be even more muted tones in the world. Not because I think there’s anything wrong with purity of culture or skin tone, but because it means that the world is becoming even more colorblind, as families gain more and more colors. It’s not that we won’t see color, but we will see past the color because of being close to people who don’t look exactly like us.

It makes me happy to think that future generations will see things differently than past generations and hopefully, when Annika is an adult, maybe it would never even occur to her that there are associations with calling her daughter or son Black. Because even if she choose to procreate with a person of lighter skin color than herself, her children (if she has any), will for sure still be Black.

Or hell, maybe we’ll have come up with a new name for it by then. As long as we continue to think it’s all good and we’re all just people underneath our outer shells, I suppose it doesn’t really matter how we label each other.

For now, though, I need to get more comfortable with saying “my Black daughter.” I will use it interchangeably with Bi-racial. And even though I see all of our similarities, I suppose I need to get comfortable with the fact that most people, at least initially, won’t. They will see a White woman, with a Black kid and wonder if she’s adopted. Or when I shout out that I’m looking for a little kid, I should assume that most people will think I’m looking for someone with blond hair, or blue eyes.

It doesn’t sadden me, in case anyone is wondering. I will never ever wish that Annika looked any differently than she does, or that we looked more alike on the surface. I see who she is, that’s what really matters. But it’s also important to communicate all of this to her.

So, by saying it to others, I will essentially be telling her that she’s gorgeous, inside and out.