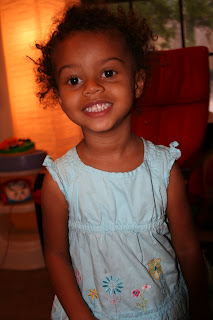 I did it. The other day I referred to Annika as a Black girl.

Not because there’s anything wrong with saying she’s Black. I’ve avoided it because of the point made to me by many of my Black friends who wonder why White people always use the adjective, Black, to describe all Black people. Why can’t they be the person with the brown hair? Or the guy in the red shirt? Or the funny person, or whatever other adjectives we often use to describe White people?

I don’t think I ever heard anybody refer to a White person as “the White guy” until I moved to Detroit and I was often in the position of being one of the few or only White people in the room.

It seemed odd to me when I heard it.

So, that is why I have avoided calling Annika, “the Black girl.” If I’m describing her I’ll say she has brown curly hair, or I will point out the color of her dress.

It’s not that I am trying to avoid Annika thinking of herself as Black. She is Black. But defining yourself in such narrow perimeters at such an early age, I think, can lead to limits in your own brain. So we will talk about her skin color. But I don’t want to subtly infer anything to her about her skin color, and have her define herself with negative stereotypes about Black people that permeate our society. She’s a girl, a person, first. She happens to have dark skin. Just like I happen to have lighter brown skin. (We’ve already had talks about how our skin colors are just different shades of brown.)

So, back to the story. The other day I took Annika out to lunch. We were in a sandwich shop, it was loud and busy with people, but not too busy. Once we got close to being done eating, typically, she was done sitting.

She started running around the table and then, across the room. Twice I chased her down and tried to finish eating. The third time, I sat for an extra five seconds scarfing down my last bites. After all, the place wasn’t big enough for her to get lost. So as she rounded the corner toward the drink machines, I didn’t worry.

When I followed her, I couldn’t see her. I ran in the direction that she had gone the previous two times. It was in the direction of the outside doors, two sets of heavy glass doors that she could not push open herself. I was pretty sure I could hear her giggling. Annika has a very distinctive, high-pitched, little girl giggle. But the restaurant was loud. There was music playing. People were talking. Dishes were clanking. I ran toward the door and asked a man, “Did you see a little girl wander over here?”

For a second my brain was clogged with a sense of urgency, and my careful avoidance of being stereotypical.

“She went outside,” he said again, pointing at a family that had walked outside. “With them.”

I felt about 90 percent sure that Annika had not gone outside with a family she didn’t know and that he was confusing me as the mother of a White child.

Plus, I still thought I could hear her.

But I was more concerned with the fact that my 2-year-old might, just possibly, might be wandering toward a parking lot that was pushed up against two busy streets.

There were some people sitting at the tables outside.

“Did you see a little Black girl run out here? She’s 2.” I shouted, realizing that in this moment I did not want there to be any confusion about who I was looking for.

“Nope.” They answered, with confidence.

I ran back inside and headed in the direction that I would have gone had the other man not steered me outside. She was there.

I felt relief. And a little weird.

I was glad that I had been able to switch my brain toward the urgency, instead of remaining PC.

After all, stereotypes are part of our language and thought process for a reason.

Stereotypes are a throwback from cave man days when one needed to be able to size up danger quickly.

They aren’t as necessary as they were then.

But I suppose they still have their place, in the right moment.