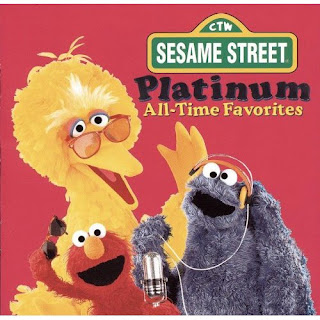 Even though I’ve tried over and over to get Annika to listen to various, kid appropriate, adult music, she will only listen to kid music. Specifically, Sesame Street sound recordings. Well, that and a couple of other random kid music that I’ve had since she was an infant.

Right now her favorite is the Sesame Street Platinum album

, which is filled with classic Sesame Street songs, like Bein’ Green, by Kermit, C is for Cookie, by (obviously) Cookie Monster, Happy Tappin’ With Elmo, and one my personal favorites, Fuzzy and Blue (and Orange) sung by Grover, (and Harry Monster) and Cookie Monster.

Annika’s newest favorite song off this album is People in Your Neighborhood and the Sesame Street theme song.

I’ve been forced to listen to several of the Sesame Street albums over the past several months and this is by far the best one.

Don’t bother listening to the ones sung by actual people. When I have checked out various CDs from the library, and popped them in the CD player, Annika just stares at me like, “Who the f is that?” That sounds like a washed up old drug addict. Last time we discussed this, I mentioned to you that I like fuzzy monsters, not washed up celebrities.”

I gotta agree with her on this one.

If you had asked me before I had a kid if I thought it was cool to listen to rock stars sing Sesame Street music I would have said a resounding hell yeah! But listening to Steven Tyler sing I Love Trash, is just creepy and Rosie O’Donnell singing I Nearly Missed a Rainbow makes me want to vomit, although, pretty much anything Rosie O’Donnell does makes me want to vomit. I almost forgave her for being so gross when I saw her once on Curb Your Enthusiasm

as a guest star, but after hearing her sing on the Sesame Street album, I have relegated her back to her gross celebrity status.

We had to return this CD

to the library a couple of days ago after six weeks and it was on hold, so I couldn’t renew it. So, I’m off to buy it on Amazon

. We just can’t live without it.