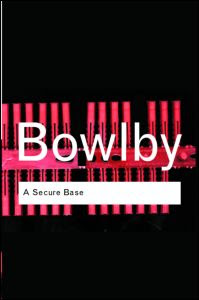 In the past two years of being a parent, I’ve grown abnormally fond of the style of Attachment Parenting. Because it is my nature to delve deeply into the roots of anything I am enamored with, I have decided to do a series on Attachment Theory, the roots of Attachment Parenting. There are lots of great books that were spawned based on this theory. I like many of those books, but I also like to know where my information is coming from, to make sure it is consistent with the original ideas.

The leading researcher in attachment theory is John Bowlby. About a year ago I read one of his works called, Attachment. It is a tome. Although my brain felt like it was glazed in an honey dijon sauce for most of it, I did glean some good information out of it, but I decided that I needed to read something a little more digestible. I picked up A Secure Base

, which is a compilation of Bowlby’s work that spanned a half a century. It is eight chapters long and each Monday, I will summarize a portion of the book. I am doing this for two reasons. One, so I will understand it better. And two, so that anyone who is interested, but is not nearly as masochistic as I am, can get a glimpse into this theory.

(Part of) Chapter One a summary of, A Secure Base:

Many people choose to take on the job of parenting, but it is a high stakes game. Successful parenting is the key to the health of the next generation. It is a 24/7 job, which means giving up other interests. Many people do not wish to believe this, however, based on numerous studies, the evidence points to the same result. Successful adults come from stable homes in which “both parents give a great deal of time and attention to the children.”

Single parenting is a not a good option, all parents must have help. The current society is a product of evolution, and a peculiar one. It is worrisome that we might adopt mistaken norms. Children living with inadequate parenting is just as bad as to leave them starving for food.

The study of attachment is an ethological one. A child’s dependency on its mother is partially pre-programmed based on the expected environment. These behaviors assume that a child needs to be near his/her mother in order to be safe from predators. Attachment behavior activates especially during times of pain, fatigue or anything frightening. At low intensity, the child may need to see or hear his/her mother. At high intensity, the child may require physical closeness.

Attachment behavior is not apparent only in children, just more obvious. We see it in adolescents and adults during stressful times. It is common, for instance, to see it activate in a pregnant woman, or a mother of young children.

Parenting can be approached from the same ethological viewpoint. In order for attachment theory to be correct, it is implicit that at least, some, parenting behaviors are instinctual, like soothing a crying baby, keeping the baby warm, protected and fed. Obviously, not all of these behaviors activate in every parent. Most of the way parents learn to behave is learned by observing other parents, starting during their own childhoods, observing one’s own parents.

The modern view of parenting contrasts sharply with two differing viewpoints. One viewpoint is that of instinctual versus learned parenting. The other overemphasizes learned parenting over instinctual. Parenting is not the product of instinct, nor is it something that is simply learned. It is a mixture of biological behavior and learned behavior. Parenting behavior is one of a class of biological behaviors that change based on environment, just like attachment, sexual behavior, exploratory behavior, and eating. In this framework, Bowlby acknowledges that some psychological theories link all of these behaviors together, but he chooses to separate them based on their own biological function and the fact that each action is so distinctly different.

Okay, so that is approximately one third of the first chapter, but this seems like a good stopping point.. I am going to go ahead and quit for now, I will finish the first chapter next week.