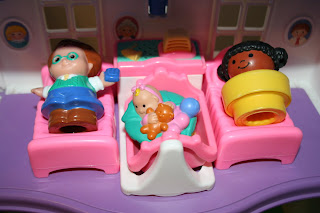 I’ve been waiting in anticipation for opportunities to talk to Annika about race, as recommended in NurtureShock

Last week an opportunity presented itself that just screamed for a conversation. I was pretty excited about it since the other conversations have been more like, “Hey Annika, what color is your skin? What color is Mommy’s skin?”

family. I bought a house and family figures off of Craigslist. It was a White daddy, White mommy and White baby. I had mentioned to a friend that my plan was to find some Black Little People to supplement the set, so she gave me a couple of Black females from her son’s toy collection since he never plays with them and wouldn’t notice them missing.

I’ve given a lot of thought to the types of toys Annika plays with. For instance, I anguished over buying her domestic toys like a play kitchen and a toy vacuum because I wondered about the implications. I’ve gone out of my way to make sure that her doll collection represents more Black dolls than White. Even though she doesn’t seem to care much for cars I’ve added some to her toy collection so that she has access to “boy” toys as well as “girl” toys. She has a huge collection of Duplos

, and she has a large animal collection.

Before I had kids, I sometimes wondered why people made such a big deal about the types of toys their kids played with. For instance, the idea that Barbie gives girls poor body images, or that boys should play with cars and girls should play with dolls seemed to me like people might be over thinking the influence of their childrens’ toys. But since then, I’ve learned that toys and play are an extraordinarily important part of a child’s life.

As I learned in Playful Parenting

, (another one of my favorite parenting books) play is how children form their thoughts about the world around them.

PP’s author, Lawrence J. Cohen writes, “Play is fun, but it is also meaningful and complex. The more intelligent the animal, the more it plays. Unlike slugs or trees, every human learns new things about the world, and themselves, though discovery and practice. Some of this learning just happens automatically, by virtue of being alive, but much of it happens though play.”

So with that in mind, I watch how Annika plays. I knew that one of the ways we would begin to discuss race was through play. It is important to me that she has lots of play characters that reflect her own skin tones.

I purposely inserted these new characters into her Little People family because it reflects her real life, even though the skin colors are switched at the moment.

Anyway, Annika has a tendency to carry around tiny little toys and she had left the Little People mommy at Toyin’s.

When she noticed that the White mommy was missing, she asked me, “Mommy, where’s my mommy?” Annika calls every “my” these days, so I knew what she meant.

I decided to take the opportunity to propose to her that one of the Black female figures could play the part of the mommy. So I handed one of them to her and said, “The other mommy is at Daddy’s, but you can use this one.”

Her response was more ardent than I expected.

“That’s not MY mommy!” She shouted, handing it back to me.

“Why can’t it be the mommy?” I asked her. She looked confused by my question as if the answer was obvious.

“Is it because she doesn’t look like me?” I asked, holding the girl next to my face.

Then I picked up the daddy figure and said, “This daddy doesn’t look like your daddy,” I pointed out.

She stared down at the White daddy with brown wavy hair and a sweater vest, as if she was realizing for the first time that he was very dissimilar from Toyin. After, all, he is holding a cell phone and wears glasses, there is some similarity.

“See, Annika, mommies and daddies can be any color.”

“Do you want to use this mommy now?” I asked, handing her the Black Little People woman.

“See,” I said. “Mommies and daddies can be all colors.”