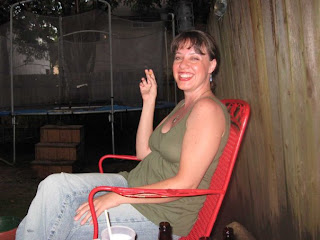 But that’s what I’m about to do.

See, I’ve been hemming and hawing with myself for the past couple of months, wondering if I’m doing a disservice to Annika by continuing to let her nurse to sleep. At 26 months, she’s at an age where many of her peers have weaned altogether.

Even though all the AP literature and people I know say that kids outgrow, well, everything, there’s this little voice in the back of my head going, “Maybe they’re all wrong. What if the mainstream parenting books are right? You need to start layin’ down the LAW!”

It’s the same voice that whispers in my ear during election years wondering what I would do if I found out the Republicans had it right all this time. And then they recruited Sarah Palin to the ticket. I felt unusually confident when I cast my vote for Obama that November even though I supported Clinton during the primaries. (Whoa, stop throwing things, you barely missed my head!)

So, I’ve been thinking, should I start encouraging Annika to start falling asleep without nursing? She CAN do it. It’s just easier to let her nurse. Ninety percent of the time she falls asleep faster on the breast Some nights after an hour or so of nursing, I’ll gently tell her that it’s time to stop nursing and go to sleep, but that is still a rare occurrence.

. They were talking about how she hadn’t learned to self-soothe while sleeping yet. I snickered and said, “My daughter’s 2 and she still doesn’t self-soothe at night.” They stared at me like I had just sprouted two heads. I felt like an ass. I hang around with so many AP people that I forget that in the outside world some people just don’t get that we think of babies as babies and not miniature adults. That conversation got me thinking about how two years is sort of a long time in baby years. Most people hit the breaking point with sleep sometime in the first six to nine months. Two years of sleep nursing and waking at night is a long fucking time.

Then I started thinking about how I quit smoking. I smoked cigarettes for 18 years. (Jeez, when I put it like that it seems like a long time.) When I started smoking, I figured I’d just be a social smoker. But damn, I liked it. There’s something super soothing about the way you hold a cigarette, stroking it between your fingers. I even liked the way my fingertips smelled when I wasn’t smoking. Even though I didn’t like the idea of smelling like a smoker I sort of got a kick out of getting a whiff of my stale smoke on a sweater as I tossed it around my shoulders, or that first scent of stale smoke in my car on a crisp winter day.

Smoking was rebellious. It was also dangerous and unhealthy. That’s why I liked it.

I tried to quit, very halfheartedly, some time in my early 20s. I think I went a week once. Then I started back up again without any qualms. I liked it and I was still in the stage of my life where getting old was like, in a galaxy far, far away. When I had my wisdom teeth removed I was told that smoking would give me dry socket and I should not smoke while I was healing. I made it four days. My husband (at the time) was baffled as to why I didn’t just give it up then. He said if I quit, then he could try to quit. I told him to fuck off. That if he wanted to quit smoking that was his business, but I had no intention of giving up the beast. It was my beast and I liked it. At that point in my life I figured I’d keep smoking until I had to start carting around an oxygen tank.

But then I entered my 30s. It was then that I realized I was not going to defeat the space time continuum and I would in fact, age past my 20s. I got divorced and when I started dating again, I found that most of the men I was into didn’t smoke and they did not find it attractive. Smoking was not cool anymore. I was not young enough anymore to make it cute and sexy. I no longer enjoyed the staleness of my car’s interior. It was time to quit.

I wonder how I would have felt if all of a sudden one day there were simply no cigarettes. It would have been pure torture for me. I’ve known plenty of smokers and I can’t think of any that have quit cold turkey and been successful at quitting. They always come back to it.

It took me several years of cutting back and cutting back to finally give it up completely. I was down to only a couple of smokes per day when I found out I was pregnant with Annika. I gave it up for good that day.

Now, almost three years later, I don’t even crave it anymore. When I pass by a smoker, I have stopped inhaling the smoke. I don’t even think I could go into a smoky club anymore. I guess it’s a good thing that all those laws have been passed against it.

As you can see, I’ve never been keen on cold turkey.

If I keep up this comparison with smoking and Annika’s sleep habits, I guess three years seems a logical time frame for her to really start sleeping like a human being, to fall asleep without needing to soothe at my breast. She’s already starting to sleep heavier. I actually had to shake her awake one morning last week when we had to be somewhere by 8:30 a.m. and she was still snoring. She’s finally started sleeping like a log in the evening and I don’t typically have to go in and help her settle back to sleep before I go to bed. And most nights if she wakes up in the middle of the night, a cuddle is all she needs to fall back to sleep.

I guess my point is that, when she’s ready, or when she has an incentive or something else to distract her, then she will give up nursing to sleep. There’s no need to rush this, especially since she isn’t likely to develop lung cancer from it.