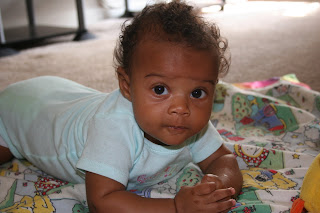 Annika was not planned, but I’ll be honest here, I’ve always felt like she was meant to be. It’s not something I can explain.

And no, I did not purposely get pregnant.

I did not want children. I didn’t like children. Before I had my own child, when women with newborns were in my presence, I tried to busy myself or pretended to be sick because I did not want to hold them. It felt awkward. I’d look down at the tiny baby and wonder just what the fuck people saw in them. They were not cute to me. They smelled funny. Their heads were floppy. They cried. I was annoyed by them.

Lest any of my mom friends reads this and is freaked out because she let me hold her baby, I’d like to also say that I do not feel this way anymore. I absolutely love babies. Now.

So, keeping that in mind, back to the topic of fate, I wonder if Annika was simply meant to be. And I was meant to be her mother. I cannot even imagine life without her or this world without her.

I’ve always struggled with whether I believe completely in fate/destiny/divine intervention, or do I believe that we have complete choice over our lives.

It’s pretty logical that I would be pulled between these two sides. I grew up in a family with a mother who was/is a die-hard Christian. She absolutely believes in the Bible, literally, figuratively and all the crappola in between. To her, the Bible is the Way, the Truth, and the Life. If you believe in the Bible, it is necessary to believe that at the very least, you are not in complete control over your life.

My father, on the other hand, is an atheist.

Right. (I shrug my shoulders.)

Oh, yes. They are still married. I don’t know the answer to that question in your head, so I am just going to skip on over that and keep going.

So, are our lives destined to be, or do we have free will?

Most intelligent people I know, including myself, would likely say, it’s probably a little of both. Sure, we can make choices, choose our paths, set goals, etc. But ultimately, we are swimming along in the sea of life where at any moment a great white shark can swoop down on us and swallow us whole, completely taking us off course.

But, that’s not good enough for me.

Lately I’ve been tripping out on Annika, watching her grow. It’s amazing to see her turning into a real person, with her own thoughts and desires.

But, I’ve also noticed how much she mimics us, and everything else she sees.

Yesterday we were out for a morning walk. Before we left, I told her we were going to look at the pretty flowers. As we were walking, we came upon a lilac tree, she pointed at the flowers, way high up in the tree and told me she wanted to pick some. I told her they were too high. I couldn’t reach them.

Then she told me that if she jumped really high, maybe she could pick the flowers.

I was floored. Wow. She thought of that herself?

Then later, she was watching a video, Max and Ruby’s Christmas

They were putting up the Christmas tree and when they were finished, Ruby notices that they forgot to put the star topper on. The tree was done and there was no way for them to put it on without messing up the other decorations. Ruby says, “Maybe if I jump really high, I can reach the top.”

Ah. So, that’s where she got it. I was sure of it as I watched her reaction to the scene. She jumped up and down excitedly and told me that Ruby was going to jump really high.

I don’t expect to find the answer. There isn’t one to get. Not from any human being. But I wonder.

I try really hard not to put things onto Annika. After reading Unconditional Parenting

, I am careful about the messages I send her. But it’s impossible not to send some messages to your children. In this world that we live in, there are so many expectations to follow, it’s impossible to live an unburdened life.

So I will continue to wonder and be impressed with my child. It’s amazing, watching a human being evolve. At least she chose to pull a positive message out.

Maybe if I jump really high, I can reach the top.