I fully admit that my fashion sense has been slipping away gradually for the last several years. I really don’t care.

But lately I’ve been wondering if I’m one of those people. That person who people look at and go, hasn’t she seen a fashion magazine in the last decade?

Or does she go out in PUBLIC, like, ever?

I thought I was just blending into the crowd.

Well, the truth is, I haven’t looked at a fashion magazine in like 10 years. I may have bought one once or twice. If I did I probably became quickly irritated with myself for wasting $4 – then took the quiz to find out if my boyfriend is REALLY that in to me – and then tossed it in the trash.

Thinking about how I look to other people reminds me of a woman I used to see around at parties during my early 20s who was still feathering her hair and wearing blue eye shadow. She wasn’t even old enough to be leftover from the 1970s. I don’t know what her deal was.

I don’t think I’m that bad. But the truth is, I don’t even know what 90s fashion looks like. So how am I supposed to know if I’m still wearing it? I mean, okay. I LIVED in the 90s. It was the height of my fashion sense years. But I dressed alternative. Yes, that’s what we called it.

I wore baggy jeans and vintage tops and big shoes with buckles on them. Or baggy jeans and tight shirts with big chunky heels. I wore a lot of black. (This was after the hair bow and denim years. Don’t judge, it was the 80s.)

I know I’m not still dressing like that, although, I would totally love for that stuff to come back in style. Maybe I should just start dressing that way again and make a real fashion statement.

These days I mostly hang out with other 30-and 40-something moms. Most of them seem to have it a little more together when it comes to looking cute. They wear skirts sometimes and they seem to know what kind of shoes are cool. I only recently heard about Keens

. I mean, I’ve seen them before, but I didn’t know what they were called. The clothes in my regular rotation are definitely not from this season. I shop at thrift stores.

In case you are wondering, the impetus for this fashion angst is from a conversation I had on Twitter with an IRL friend in her 20s and a cute dresser.

punc_rock: yesterday i tried on a pair of jorts. and i liked it.

marthawood: @punc_rock interesting. Did not know that jean shorts were considered uncool. Am wearing some now. Also wondering if I look …..

marthawood:@punc_rock … To 20-somethings the same way ppl w/ feathered hair looked to me in the 90s.

punc_rock: @marthawood haha, well keep them on, now you are a hipster! voila, just like that. 😛 jk.

Well, I know I am not a hipster. Nor do I want to be. I’m too old. I really don’t want to be like that 40-something woman who worked in the office at my high school and wore huge hair bows and denim skirts to go along with her bleached, permed hair. She looked ridiculous. Okay, we ALL looked ridiculous, but at least the rest of us had an excuse. We were kids. We didn’t know any better. 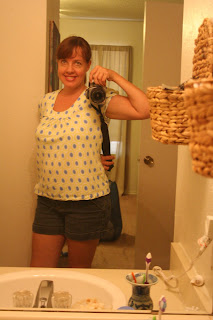 I took a picture the day I had that conversation with my friend.

That’s what I was wearing.

Aaargh, I need some new clothes! But then I think how ridiculous that is. To go out and get a new wardrobe. The majority of my social interaction is playgroups at parks, outside, with toddlers who expect you to pick them up even if they are soaking wet, have food on their hands, holding a wet sippy cup….

And I wonder, just why I would bother.

Hell, maybe I’ll just go get some cutoff jorts and call it a day.

Wait a second. Maybe my problem is not my clothes, but the fact that I never hang out in the adult world.