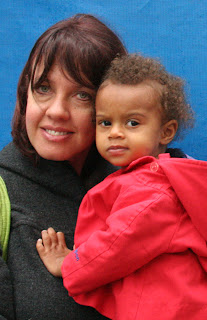 Annika got mistaken for a boy at the park the other day. I guess the fact that she was wearing a black T-shirt and blue shoes won out over her blue nail polish and turquoise pants bespeckled with butterflies.

Those kinds of mistakes just make me laugh a little. At least they are the kinds of things that pretty much happen to everybody during the infant and toddler years. Mistaking a girl for a boy or vice versa is par for the course in pretty much any culture.

That experience far outweighed the interaction I had with a woman at the same park earlier in the week.

I was swinging Annika in the toddler swings when a graying White woman approached with a little blond girl.

I looked at the little girl and said to Annika, “She looks about the same age as you, sweetie.”

The woman smiled and asked Annika’s age. I told her, 2. She told me the age of the child with her, 2 and change. We smiled and murmured things about how cute they were. The girls giggled in their swings.

Then she turned to me and said, “Are you the mother?”

THE mother. Not even her mother.

This is where you expect me to get all irate.

My stomach did not turn to bile or get all twisted up in knots. It turned more to a consistency of Playdough. Lumpy. Pureed. Mushy. Bored. Trite.

I felt my face go flat with disappointment at this now mundane question. It’s getting a little tiring.

Even though Annika was still laughing and shouting “Wee, wee!” I asked her if she was ready to get down.

“Baby, do you want to slide?!” I asked her all excited.

I just wanted to get away from the woman, who had noted that she was in fact, the little girl’s grandmother.

Either she noticed my lack of interest, or she understood that she had made a mistake. After a few minutes she said, “The reason I asked you if you were her mother is because you run into a lot of nannies here too.”

That is true. It’s the only park where I see nannies.

To me, the nannies stick out as nannies. They gather together with strollers and bottles and chat with each other while the children play within a safe distance. There is a distance in their interactions with the children in their care. They lack the tenderness that you see between mothers and their children. Maybe that’s something only mothers notice.

I finally got Annika off the swing under the guise that we needed to change her diaper and offered her a snack.

Anyone who is not the mother of a Bi-racial child might not really get my point here. I even hesitated to write this because I’m not even quite sure I get it, but somehow I felt this experience was an important one to share.

That feeling – that dull, soft spot that has turned so quickly from irritation to lack of interest in engaging someone who would be even slightly insensitive to our familial difference – is very new to me.

I’ve never been one to turn away from a debate, a fight, a dialogue. I am always the one searching for knowledge and enlightenment. My curiosity peaks at the slightest hint of something new or out of the ordinary.

But this stuff, this is not new. Not in this country.

That soft, dull feeling that I can’t even begin to describe as an ache, because it doesn’t ache. It is more like a tumor. That is what I imagine dark-skinned people feel every time they interact with insensitive White people. People who think that a Band-Aid makes the wound disappear.

I spent nine years living in Detroit. I cannot even begin to tell you the hatred and vitriol that divides the metropolis. It is in ingrained so deeply that most people, Blacks and Whites, don’t even see it as a color issue anymore.

I spent a lot of time chatting with my Black friends in Detroit. The ones who cared enough to attempt to enlighten me, about how it feels for your feelings to be swept aside as easily as, “Oh sorry, it was an honest mistake.”

But I didn’t really get it until now. Or, I should say, I am feeling it. Maybe I will never really get it. But I feel something that I definitely never felt before.

It’s only been two years, of slip ups and insensitive questions about the maternal bond I share with a child who is not the same color as me.

And already, I have no desire to interact with someone who can’t or won’t even admit the possibility – until she has hard evidence – that she might be my daughter.