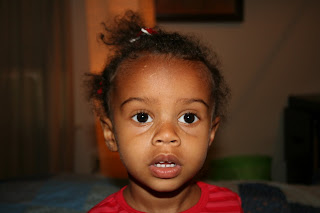 As a former journalist I defend the media whenever I get the chance. Sure, it has its problems, but it’s a tough job.

HOWEVER, sometimes, the media gets involved in things they have no business being involved in.

Monday night CNN aired the first part of a series called, “Doll Study Research,” on AC360.The topic was that Anderson Cooper and his team performed a “study” about how Black and White children see race.

I like how they named their study after a famous actual research study that actually used dolls.

I’m no scientist, nor am I child psychologist, but I thought the clips were way more telling about the producers of the show adults asking the questions, than the children. Additionally, the way these children answered was more a reflection of our society than the actual kids’ feelings or beliefs.

One thing I’ve learned in the past few years is that how you talk to children makes a huge difference in the answers you get.

In the clip labeled “show me the dumb child” they asked the kids a bunch of questions about which kids were smart, dumb, nice, mean, ugly, good-looking, good and bad. The younger set of children was questioned in the wrong way. Children that young are looking to please. The older kids were way more articulate.

If you give a kid a set of pictures and tell him/her to pick out the ugly one, the child is not going to say, “Oh, none of them are ugly.” They are assuming that there is an ugly one, so the way I see it, unless a child has been talked to about this topic, they are going to pick the one they think you want them to.

I really liked what this dad had to say about his daughter’s answers. His daughter said that all the children were equal. Her response was well-thought out and knowledgeable. Then her dad noted that this is what he had taught her. Hello! Let’s teach our kids how to think about racism instead of waiting for Anderson Cooper to tell us what they think.

In the headline, this mom was portrayed as a mother who is shocked by her daughter’s “white bias” as this so-called study claims to have found. But if you watch and listen, her answers are pretty savvy. She knows her daughter isn’t a racist. She understands exactly what the book NurtureShock

tells us, that children pick out people who look similarly to themselves and their parents as being better than others.

These children aren’t racist. Nor do they have a condition called “white bias.” They are just kids. Who got asked a bunch of stupid questions.

As an aside, I have to add that I think it’s great (sarcasm) how CNN has found a new label to give kids.

I hope my child never gets “white bias.” But just in case she does, I hope the pharmaceutical companies are working on a pill for that.