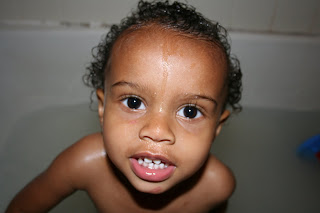 Annika mixes up her Ks and Ts. When she asks for Twinkle Twinkle Little Star, she says, “Kwintshle, Mama, Kwintshle.” When she gets tickled, she laughs and says, “kittle.” This has nothing to do with health care reform and the bill finally passing, as this post does, it’s just fucking cute.

When I awoke this morning to read that the health care bill finally passed yesterday, I shed a few tears of joy and relief.

I’ve been without health insurance since Annika was 6 months old. I left my job to care for her at home in the first year of her life and with that decision came a decision to lose health insurance for myself. I was lucky enough to have an employer who would cover me for the first six months after she was born. They were not required to do so, but they did anyway because it’s a small company and they felt like it was a good decision for the company and their employees leaving on maternity leave.

My biggest fear with losing health insurance was not for my current health, but for some big unknown in the future. What if I get cancer and my then insurance drops me because it might be a pre-existing condition?

Now that we have health care reform in this country I am overjoyed at the prospect that I will soon (someday?) be able to pay a bill once a month that will allow me to be covered in the event of a catastrophic occurrence in my life, much the same as if I were to have a car wreck and my car is covered.

I’ve always thought that insurance was one of those necessary evils. I mean, it’s silly to pay into a system that you will never get anything out of unless something bad happens to you, right? In theory and with cars and homes, yes, it is sort of silly, however in such a large society, I suppose it’s necessary. The truth is, big companies have more clout than the average American and the reason cars and houses are required by law to be covered is because banks don’t want to take the fall for accidents. Human beings on the other hand, can just go piss off.

The odds that my body will fail at some point in my life are greater than my car getting into a deadly wreck before I trade it in for a new one.

My expectations of a great change with this health care bill are not great. It will be months, if not years (more likely) before people like me will be able to expect any great change in their lives. I might even (hopefully will) have some coverage through a job or another network by then.

But it’s nice to know that our lawmakers finally acknowledge that people are just as important as cars and houses. Finally.