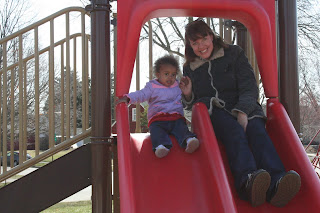 Annika has been learning her colors for some time now. She learned brown and orange pretty well several months ago For a while she confused all her colors, but in the past few weeks she’s really gotten the hang of it. Since she understands now that she knows her colors, she’s been excitedly pointing out the colors of things without being prodded.

A mama friend of mine, who is also a fellow Bi-racial mom, told me that her daughter started being curious about her skin color around the age of 2. So ever since Annika’s new proficiency with colors and labeling them I’ve been waiting with mild and somewhat increasing interest in when she notices our skin color is different.

A couple of weeks ago we were sitting in the living room with our dog, Baltar, and she looked at him and said to me, “Baltar brown.”

This was new, pointing out his color instead of the color of something inanimate. I wondered if she was going to notice her own skin color, and then mine. I still don’t know what exactly I will say to her about our differences. I think at first I will be matter-of-fact about it and then as she ages and the appropriate times present themselves I will delve deeper into it.

Then she looked down at herself and said, “Annika pink.”

She was wearing a pink shirt.

Then she pointed at me and said, “Mommy red.”

Yep, I was wearing a red shirt.

I wasn’t disappointed though. She’s a little young to talk to about skin color yet.

But that episode and a Facebook exchange with another mom about brown-skinned dolls led to a reminder of a couple of articles I read last year that I loved and I wanted to share. Even if you don’t have children, these articles are good reminders that we, as a society, are still not completely comfortable with the topic of race. But it’s good to talk about it, as you will read.

The first article is an excerpt from the book Nurtureshock

. The article talks about how children are inherently racist. Not that they hate all people of different color, but they naturally select people who are like their parents, gravitate to them, and unless they are told differently, they believe that people similar to them are the best.

Studies performed at University of Texas, in Austin, showed that White parents didn’t want to talk to their children about race. Unfortunately, this is the wrong way to approach it. These parents want their children to be colorblind. Their intentions are admirable. But silence on the topic was found to give the children the opposite idea. The researchers found that these kids, who could clearly see the differences, took it to mean that their parents didn’t like Black people, or they thought it was a taboo topic.

The next article is about a Black family who adopted a White little girl and the racist attitudes they encountered, especially the father when he was alone with his daughter.