If I wasn’t sure before, I am now. Yes, I am wholeheartedly a mom.

A mom who wipes foul-smelling poop off of another person’s butt and makes jokes while doing it. A mom who doesn’t bat an eye at human feces on my living room floor. And now, a mom, who in the middle of the night, catches a handful of vomit in my hand and instead of being grossed out, happily holds it as proof to my daughter that I am in control and I will always take care of her.

Well that, and giddy with the knowledge that I won’t have to change the sheets.

Annika has a had a nasty cough for the last couple of days so she’s having trouble sleeping. Last night she went back to sleep easily after a couple of night wakings, but around 3 a.m. she awoke and informed me that she wanted food. I was prepared. I grabbed a small bunch of green grapes out of the fridge and we sat in the middle of the bed while she munched them down and drank some cool water.

Then she began coughing again. With the coughs up came everything she had just eaten.

It all happened so fast, I can barely believe that my first instinct was to reach out and put my hand under her mouth and catch the puke as it came boiling back up her esophagus.

I grinned to myself as I carried the puke to the bathroom sink and told her I was going to bring a towel. It was such a mommy moment.

Really though, the best part was afterward. She stayed awake for almost two more hours, talking, singing, making requests and fighting sleep. Something about catching that puke gave me a pool of patience. I felt like one of those super patient mamas who only has kind words and cuddles for her babies. 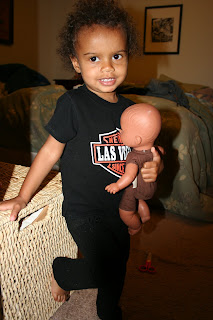 The girl in black: I introduced Annika to Johnny Cash last week. She thoroughly enjoyed his music. Today she picked this outfit out. Kinda spooky.