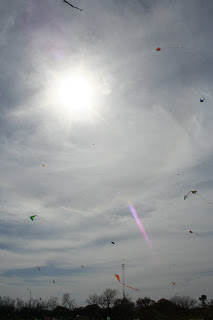 Toyin and I took Annika to the annual Zilker Park Kite Festival today for some fun, sun, and toddler running.

She wasn’t that impressed with it. The festival was super crowded. Annika reacts to crowds much the way I do. They slow her down. She gawks at everything. She is overstimulated and can’t really enjoy the festivities. So we didn’t stay very long.

Once we had made our rounds, we headed back to the car. As we picked our way through the crowds of cars, families, dogs and random kite strings in our path, I overheard a snippet from a father who was clearly at the end of his rope. He was semi-chasing his son, who was around 5 or 6, with a candy bar. Shoving it up against is mouth and loudly saying to him, “Just open your mouth and TAKE A BITE!”

As the mother of a picky eater, I had to laugh. Before I had a child, I might have wondered what on earth was possessing this man to try to force-feed his kiddo a candy bar. I may have even given him a dirty look and then spewed things about terrible parents and child abuse. 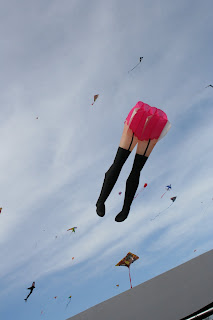 But not now. I’ve never had to force feed candy to Annika. That’s the one thing she will gladly eat. But I have been known to chase her with food.

This poor dad, he’d probably been trying to get his kid to eat all day then finally broke down and bought a candy bar, thinking his son would eat that and at least he’d save him from malnutrition for another day.

“But I don’t LIKE peanuts!” the son wailed as we passed them by.

My guess is that dude is having a huge drink right about now.

We had parked at Toyin’s office building right up the street. Annika really wanted to go inside and go up the elevator. Figures. Take the kid to a kite festival with junk food and bouncy castles, but she just wants to go press buttons in an office building.

So we did that and then we went to eat Chinese food at our favorite Chinese buffet. 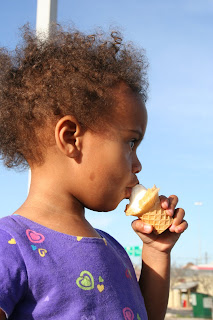 The best part of the day was when Toyin made a mini ice cream cone as we left and Annika stood outside learning how to lick the “cream.”